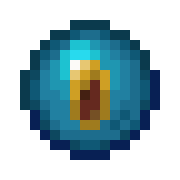 Conduit Power is an area-of-effect status effect given by conduits that grants bonuses comparable to a combination of Water Breathing, Night Vision (only underwater), and Haste (only underwater).

Players under the effect of Conduit Power receive all of the benefits of Water Breathing, Night Vision, and Haste. This means that their breath meter does not decrease, it gets filled up even underwater‌[Bedrock Edition only][1], they can sleep in a waterlogged bed‌[Bedrock Edition only], they are able to see underwater, and their underwater mining speed increases.

Despite Conduit Power being able to prevent drowning, it does not stack with Water Breathing, which means if the player has both effects, the Water Breathing still ticks down.

Conduit Power I grants a benefit identical to the Haste effect as Haste I‌[JE only] / Haste II‌[BE only]. Conduit Power X has an identical effect to Haste X.‌[JE only] The levels of Water Breathing and Night Vision are unchanged by the level of Conduit Power. Conduit Power and Haste do not stack; the higher level effect is applied.

Higher levels of Conduit Power can be obtained only by using commands.

In Bedrock Edition, because the conduit power effect lasts for 12 seconds above water, night vision is activated but does not show borders.

Issues relating to "Conduit Power" are maintained on the bug tracker. Report issues there.