The Cog (also known as the Gear) was a block that was leaked and was supposed to be added to the Indev version of Minecraft.

Cogs could only be placed on the sides of a block. Placing them in a space where two sides are next to each other would cause the two cogs to appear on both sides. Cogs did not do anything, and they could not be obtained without hacking one's inventory. Placed cogs were impossible to destroy. Any mining directed at a cog phased through to the block behind it, much like water. If the block a cog was on was destroyed, the cog was not removed, but oddly, it would become invisible much like barrier blocks. The cog still existed on the map, and it would show up again if the block was replaced. Cogs placed in mid-air, through the use of a map editor, were also invisible, and they would show up if a block was placed next to them.

Cogs were deemed to be removed from the game when their data value was taken by redstone and their sprites deleted from Minecraft's files. It's unknown what the real purpose of cog was, but it can be presumed that they would've done things similar to what redstone can do. Before Indev was removed, it was still possible to hack a player's inventory in order to get cogs and place them. It's now impossible to obtain or even see the cog anymore without mods.

Whenever one changes the texture for redstone, the cog texture sprite will not appear and will be the black and purple unknown item block.

An example of cogs in Indev. 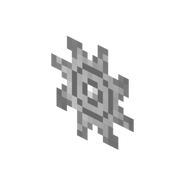 A frame of the cog.
Add a photo to this gallery
Retrieved from "https://minecraft.fandom.com/wiki/Cog?oldid=226711"
Community content is available under CC-BY-SA unless otherwise noted.