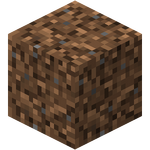 Coarse dirt is a variation of dirt on which grass block cannot spread.

Coarse dirt can be found as large patches in the windswept savanna, wooded badlands, and two variants of old growth taiga biomes.

It also generates in mushroom farm rooms in woodland mansions.

Coarse dirt has the ability to grow saplings, sugar canes, mushrooms, bamboo, flowers, and sweet berries, which can be planted directly under appropriate conditions.

Neither mycelium nor grass can spread onto coarse dirt.

Coarse dirt can be tilled using a hoe to become normal dirt. There must be an empty space above the coarse dirt for it to be tilled.

Using any type of shovel on coarse dirt turns it into a dirt path.

Issues relating to "Coarse Dirt" are maintained on the bug tracker. Report issues there.