Clouds as they appear with Fancy graphics

Clouds are graphical effects in the sky. They serve a solely aesthetic purpose, although they can be used to determine compass directions because they always move westward. 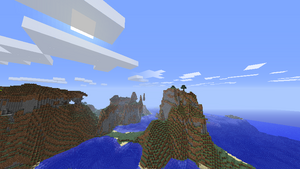 The same clouds during different time and weather conditions.

The appearance of clouds varies depending on the graphics settings used:

Fancy: Clouds are translucent, three-dimensional prisms, approximately four blocks tall and 12x12 blocks wide. At night they turn a shade of blue and become more transparent. They are similar in appearance to stratocumulus clouds.

Fast: Clouds are two-dimensional and opaque. They do not change between day and night. Their smallest horizontal dimensions are 8×8 blocks wide. Fast clouds in Bedrock Edition are also opaque, but remain three-dimensional. Their appearance is similar to cirrus clouds.

From above or inside the clouds, they appear semi-transparent, regardless of the player's graphics settings. The sun and the moon always appear visible through the clouds from below.[verify]

The shape, dimensions, and color of clouds can be changed by modifying the clouds.png file located within assets\minecraft\textures\environment within the version's JAR file. The file's dimensions can be changed to any size.

Clouds always float westward between layer 100 and 150 based on the viewer's height.[verify] They are not interactive, and simply float through blocks and entities. Unlike in real life, clouds themselves do not produce rain or snow, meaning rain or snow continues even above the clouds.

Since clouds are rendered client-side, the position of clouds is different for each player on a server.

Clouds retain their position even if the game is restarted. The position of clouds is persistent between worlds — if the player quits their current world and generates a new one, then travels to the same coordinates they were at in the previous world, the clouds appear in the same position as the previous world.

Clouds can be toggled between Fancy, Fast, and Off in the Video Settings.

Issues relating to "Cloud" are maintained on the bug tracker. Report issues there.