Edit
This article is about the block found in rivers. For the item, see Clay Ball. For other uses, see Clay (disambiguation).
Clay 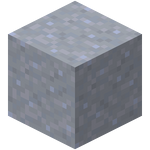 Clay is a block that can be found abundantly in lush caves, less commonly in shallow surface water or created from mud using pointed dripstone. It can be smelted into terracotta or broken into clay balls which are smeltable into bricks.

Clay is most commonly found underwater in swamps, beaches, oceans, and at the bottoms of rivers and lakes in shallow, crystal-shaped disks, disregarding adjacency to other types of blocks.

Clay generates in mason houses in plains, savanna, and desert villages, and under fisher cottages in taiga villages.

Clay generates in large quantities on the floors of ponds in lush caves.

Clay can also generate in lush caves in the form of blobs. Clay attempts to generate 46 times per chunk in blobs of size 0-160, at any height. Clay can replace stone, diorite, andesite, granite, deepslate, and tuff.

In Java Edition, when the player has the Hero of the Village status effect, a mason villager might throw that player a clay block as a gift.

If mud is placed above a block with a pointed dripstone underneath, the mud eventually turns into clay, although the dripstone does not deposit any water into a cauldron.

Clay can be placed under note blocks to produce flute sounds.

Issues relating to "Clay" are maintained on the bug tracker. Report issues there.