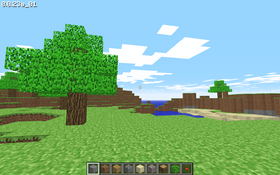 To celebrate 10 years of Minecraft, a JavaScript remake of Classic 0.0.23a_01 titled Minecraft Classic was uploaded to the Minecraft website.[1] This version can be played at classic.minecraft.net.

For data values of blocks in this version, see Classic remake data values.

Differences and inaccuracies from the original[]