Classic is the second development phase of Minecraft, following "Pre-classic" and being succeeded by Indev. It was the first Minecraft development stage to have some of its versions released to the public. This phase was unnamed until June 28, 2010, when a blog post was written to name the development phases of the game.

The release of the Survival game mode was conducted in a series of incremental tests named Survival Test. The test had a point-based system where the player could acquire points from killing some of the game's first mobs. Survival Test was quietly removed after the website received a major overhaul on December 16, 2010.

On May 9, 2019, Mojang released a re-creation of the classic Minecraft experience that anyone can play in their web browser. It is available for play here.

Unlike the Alpha, Beta, and 1.0 versions of Minecraft, Classic does not support many of the main staples of the game such as crafting or a proper Inventory.

Minecraft Classic was the original version of Minecraft. It was originally given away for free. However, it is now bundled with the release edition, as part of the Minecraft Launcher.

In Minecraft Classic, a player was limited on how far they could explore since the worlds were limited in size.

Like all of the other editions of Minecraft, Classic was a sandbox game. This means that there are no objectives and no unlocks — a player is free to do what they like.

As with most early Minecraft editions, worlds were generated randomly and had limited space.

Unlike the Alpha and Beta editions of Minecraft, sponges had the ability to absorb water in Classic.

Singleplayer was a mode within Minecraft Classic that, once selected, placed a player in a world surrounded by fog. In this world, a player could use the infinite amount of materials available to them to create whatever they wanted.

Guests to the Minecraft website were able to play Minecraft Classic for free. However, the links to access it are no longer on the front page which makes anyone without the link unable to play it.

As with current Minecraft servers, Minecraft Classic servers were compatible with mods and plug-ins.

Blocks that were available in Minecraft Classic included:

Many versions of Minecraft Classic' are considered to be lost: (Recently, the .jar file for 0.0.23a_01 has been found). 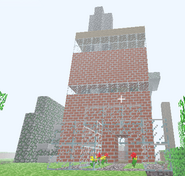 A three-story house built by a player in Minecraft Classic.

Sheep cage in Classic 0.30.
Add a photo to this gallery

Retrieved from "https://minecraft.fandom.com/wiki/Classic?oldid=205404"
Community content is available under CC-BY-SA unless otherwise noted.