Edit
This article is about the fruit that drops from chorus trees. For the building material, see Popped Chorus Fruit. For other uses, see Chorus.
Chorus Fruit 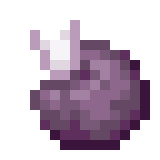 Chorus fruit is a food item native to The End that can be eaten, or cooked into popped chorus fruit. It can be eaten to restore saturation even when the hunger bar is full, and eating it may teleport the player up to 8 blocks in any direction.

Chorus fruit can be obtained by breaking chorus plant blocks.

To eat chorus fruit, press and hold use while it is selected in the hotbar. Eating one restores 4 (

) hunger and 2.4 hunger saturation and does not require the player to have less than a full hunger bar to eat. The player may also be teleported: up to 16 attempts are made to choose a random destination within ±8 on all three axes in the same manner as enderman teleportation, with the exception that the player may teleport into an area only 2 blocks high. The player does not land in the average centroid of the block, but rather to any position within an 8-block range. Or, when using elytra, back to the ground regardless of the height it was used at.

The chorus fruit, unlike an ender pearl, can teleport the player through solid blocks. The algorithm tries to avoid water; the player cannot teleport into a space occupied by water or lava.

If a teleport succeeds, a sound similar to an enderman teleporting plays originating from the teleportation origin location. Chorus fruit has a cooldown of 1 second before being able to be used again. The cooldown is represented by a white overlay on the chorus fruit in the hotbar.

Eating chorus fruit may teleport the player into areas protected by bedrock, barrier blocks, or other blocks that are otherwise unbreakable in survival mode.

Foxes can also eat chorus fruit and the teleportation effect works the same as with players.

Issues relating to "Chorus Fruit" are maintained on the bug tracker. Report issues there.