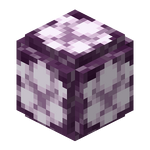 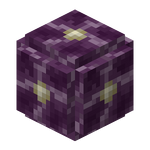 Chorus flowers are plants that are found in the End. They grow on chorus plants.

Chorus flowers can be mined with any tool and drop themselves when broken. They do not drop anything when pushed by a piston or water, destroyed by a ravager‌[Bedrock Edition only], or when their supporting block (the chorus plant block) is destroyed, since the chorus flowers grows on top of chorus trees. They also drop when hit by a trident‌[Java Edition only], arrow, or snowball, or a fire charge shot from a dispenser.

Chorus flowers are naturally generated in the End at the top of chorus trees, in their fully-grown state.

Chorus flowers are used to grow chorus plants. They can be planted on end stone in any dimension.

Chorus flowers can be planted on end stone and grow in any dimension, regardless of light level. A flower stops growing once it has reached age 5 (appearing purple rather than white), but may be harvested and replanted to reset the age. Chorus flowers do not grow if planted 1 block below the surface of the ground.

Chorus flowers must be above end stone or chorus plant, or be above air and horizontally adjacent to exactly one chorus plant. If these conditions are not met, the block breaks without dropping anything.

Each block tick until the flower reaches age 5, the flower attempts to grow if the block above is air. The flower does not age if growth is not attempted due to lack of an air block above. Bone meal has no effect on growth.

The flower may attempt to grow upward depending on the structure of chorus plant blocks directly beneath:

If upward growth does not occur and the flower's age is less than 4, the flower may attempt to branch horizontally. 1–4 branches are attempted on an unbranched plant or 0–3 on a branched plant. For each branch a horizontal direction is chosen at random, and if the block in that direction is an air block with more air blocks on all other horizontal sides and an air block below, it is replaced with a flower with age incremented by 1. If at least one branch succeeds, the original flower block is turned to chorus plant.

Upon a successful growth attempt, the chorus flower emits a low-pitched sound, similar to the sound endermen emit when teleporting.

If no growth occurs on a growth attempt, the flower's age is set to 5.

The amount of chorus flowers a player gets from a fully and unrestricted grown chorus plant ranges from 1 to 8, averaging at around 3.7 flowers per plant.

Issues relating to "Chorus Flower" are maintained on the bug tracker. Report issues there.