Edit
watch 28:07
Minecraft Interactive Experience
Do you like this video?
Play Sound
For the mob in Minecraft Dungeons, see MCD:Chicken Jockey. 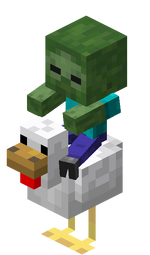 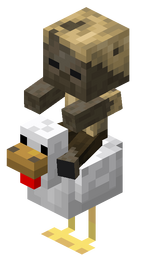 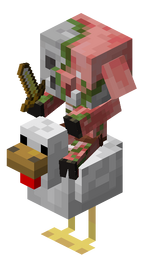 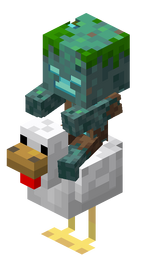 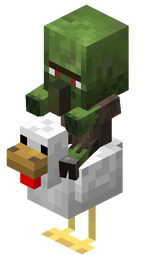 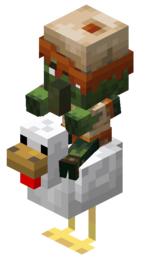 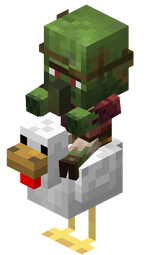 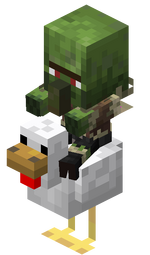 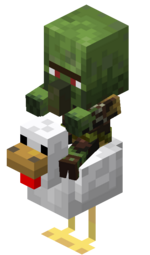 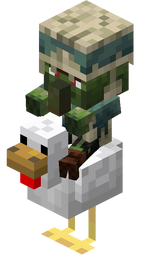 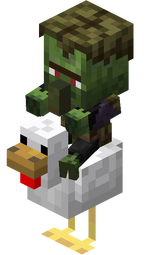 Each baby zombie, baby husk, baby zombie villager, baby zombified piglin, or baby drowned that spawns has a 5% chance to check for an existing chicken within a 10×6×10 box centered on the baby's spawn location and spawn riding one of those chickens if there are any. If it fails that 5% chance to check for existing chickens, there is an additional 5% chance of the baby zombie spawning mounted on a new chicken. In a chicken-free environment, each spawned zombie has a 0.25% chance of becoming a chicken jockey; if chickens are present, the chance increases to 0.4875%.

In Java Edition, there is an extremely low chance for a baby zombie villager to spawn wearing enchanted full diamond armor and holding an enchanted iron sword on its left hand while riding a chicken; this chance is 1 in 1.9921×1035[citation needed], making this mob the rarest in the game.

In Bedrock Edition, baby zombies, baby husks, and baby zombie villagers have a 15% chance to become a jockey when it tries attacking a villager, player, or iron golem, which can ride:

Any rideable or tameable mob can become unrideable or untameable, respectively, after being mounted by a baby zombie.

In Bedrock Edition, if a baby zombie has spawned on another type of mob (such as an adult zombie), killing the baby zombie's current mount in an area populated with chickens may result in the baby zombie jumping onto a chicken rather than attacking the player. In addition, Baby Zombies riding on other zombie variants appear to have a chance to change into the baby variant of the mob it's riding.

If killed by a charged creeper, it drops a zombie head.

They drop 12 when killed by a player or tamed wolf, extra 1–3 is given if the zombie has equipment.

Baby drowned also have an 8.5% chance each of dropping their:

The chance of each can be increased by 1% per level of Looting, up to 11.5% chance. It is usually badly damaged and can be enchanted.

The baby drowned always drop their nautilus shell, but only when held in their offhand.

Like baby zombies, they drop 12 when killed by a player or tamed wolf.

Baby zombified piglins also have an 8.5% chance each of dropping their golden sword. The chance of each can be increased by 1% per level of Looting, up to 11.5% chance. It is usually badly damaged and may be enchanted.

Like baby zombies, they drop 12 when killed by a player or tamed wolf.

If a baby zombie or zombified piglin wearing a pumpkin or jack o'lantern is killed using a tool enchanted with Looting, there is a chance equivalent to the level of Looting used to drop the pumpkin or jack o' lantern, up to a maximum of a 3% chance of a drop.

Neither the chicken and rider's IDs nor the entity data are any different than if the chicken or rider were standing alone.

This section would benefit from the addition of isometric renders.
Please remove this notice once you've added suitable isometric renders to the article.
The specific instructions are: MC-188880 before and after, also these images are massive and there is overinking to be cleaned here

Issues relating to "Chicken Jockey" are maintained on the bug tracker. Report issues there.