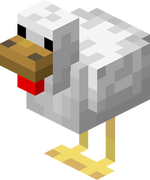 Chickens are common passive mobs found in most grassy biomes, and are the main source of chicken, feathers and eggs.

Chickens spawn naturally in the Overworld in groups of four on grass blocks[a] with 2 blocks of free space above it at a light level of 9 or more.

After the world generation, they spawn individually.

5% of chickens spawn as chicks.

They require a light level of 7 or more to spawn and are found in groups of two to four.‌[BE only]

Baby zombie jockeys no longer spawn riding chickens, but check for nearby adult chickens to mount prior to attacking a player, wandering trader, adult villager, snow golem or iron golem.

When an adult chicken is killed, it drops:

Chickens that were not part of chicken jockeys lay 1egg every 5 to 10 minutes.

Killing a baby chicken yields no items or experience.

Chickens are active, wandering aimlessly, chicks also following adults. When falling, they flap their wings and fall slowly, thus they are immune to fall damage. However, they avoid falling off cliffs. When harmed, they flee around. Chickens uniquely attempt to jump up to climb stairs instead of climbing them normally.[1] They are attacked by ocelots, untamed cats,‌[JE only] and foxes. Chickens follow players holding various seeds within 6 blocks.

Chickens are able to swim, in a derpy fashion, visibly flapping their wings and staying on the water surface. While swimming, chickens need only one block of air above their heads.

Chicks take 20 minutes to grow up, but the growth time can be accelerated by 10% each time it is fed seeds.

Chicks are incredibly small. They can pass through openings even smaller than a full block, though not willingly. When one is riding a minecart, it is impossible to hit as it is completely inside the minecart's hitbox.

Chickens are the only Overworld mob that can breed without a separate item. Chickens lay eggs at random, and an egg and thrown at the ground has a 1⁄8 chance of spawning a chick. If a chick spawns from a thrown egg, there is a further 1⁄32 chance (overall 1⁄256 per egg) to spawn 3 extra chicks. It is theoretically possible for a stack of 16 eggs to yield 64 chickens, if all spawn chances succeed for all eggs.

If the player throws an egg at a glass pane, the chick can spawn on the far side of the panes.

Chickens have entity data associated with them that contain various properties.

Issues relating to "Chicken" are maintained on the bug tracker. Report issues there.