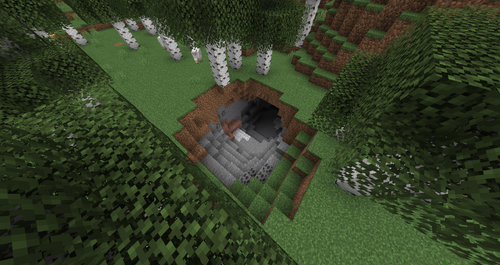 A cave entrance found in a Birch Forest biome.

A cave (also known as cavern) is a common terrain feature that generates in the Overworld and the Nether. Caves are usually found underground. They are open spaces of various sizes and shapes that often intersect with each another or with different generated structures, creating vast cave systems. They usually feature plenty of ores and are great places to gather resources, but can be dangerous because of the hostile mobs that spawn in the darkness.

Caves are underground structures consisting of randomly generated patches of air blocks and lava source blocks (at layer 10 and below), hollowing out an area and exposing other blocks generated with the terrain (such as stones and blobs) in the interior. Their structure typically consists of a series of irregular tunnels branching off and winding in other directions, which may connect to the surface, creating natural entrances to the cave. In jungle biomes, vines generate in caves near the surface. Sand often falls into caves generated near the surface of a desert or beach; craters in the sand can alert the player to caves below the surface. Caves cannot cut through red sand nor snow blocks, despite these generating as a surface block in several biomes.[1]

Caves generate at any altitude up to Y-level 128, and may span from the surface all the way to the bedrock at Y-level 5‌[until JE 1.18] or -59‌[upcoming: JE 1.18]. They frequently intersect natural structures such as other caves, dungeons, ravines, and mineshafts. Because of low light levels, hostile mobs and bats often spawn in caves deep underground.

A small cave with a zombie inside.

Small caves are primarily located close to sea level and are unlikely to be linked to other caves. Because of their relative shallowness, they are unlikely to contain anything rarer than small deposits of basic ores such as coal and iron. Such caves may have multiple entrances that are naturally lit by sunlight or moonlight. These type of caves almost always feature pools of water/lava within, likely caused by the generation of the water itself.

A medium cave with a skeleton.

Medium-sized cave systems are commonly found within reach of other, often smaller caves, which are accessible via mining. These caves frequently contain large deposits of basic ores alongside small repositories of rarer materials. Such caves also regularly contain at least minor water or lava flows as well as the presence of dungeons.

These are large subterranean systems, found deep within the overworld, often close to bedrock. They hold large deposits of essentially every known type of ore - with rarer materials, such as diamonds and emeralds. Note that emerald ore is exclusively generated in mountains biomes. Such systems contain a number of lakes of all types, as well as the presence of major lava and water flows.

There is little to no difference between small, medium, and large caves other than their size and complexity.

Mega caves are huge spacious caves that are extremely rare to be found. They expose many ores and can potentially expose mineshafts. Unlike large caves, mega caves can range from 20 blocks and above in length. They can also be possibly bigger than a small ravine. Mega caves that generate low enough can form giant lava oceans.

During the terrain generation process, large symmetrical and cylindrical or spherical voids of various sizes can infrequently be created underground, which often merge with other cave systems. These unusual type of caves vary from roughly 1 to 27 blocks in height, and from roughly 13 to 30 blocks in diameter, though larger examples are quite rare. Although not particularly of interest, from a mining perspective, they may appear unnaturally regular in comparison to the surrounding terrain. While the smallest rarely contain many ores, the largest can be quite useful for mining as their sheer surface area rivals that of a large ravine.

Rarely, dungeons or strongholds can be found in these rooms.

These caves have a large hole for an entrance and then spiral down, often cutting into coal and iron deposits. Sometimes, these entrances can go nearly straight down, exposing rarer minerals.

A medium size connected cavern with two semi-layers. The torches were placed by the player.

An example of a cave connected with the sea.

A player can see them from the surface of the ocean when they generate as an underwater canyon lit by magma blocks on the floor, surrounded by obsidian.

Underwater caves are completely flooded caves that may have obsidian along their bottoms formed from lava with the water present throughout, and also magma blocks. They generate exclusively on ocean biomes.

Being completely underwater, only the magma blocks provide any air for entities to breathe, since they generate bubble columns. They have often seagrass, but since they don't generate exposed to sky kelp cannot generate, unlike sea-access caves.

An x-ray view of a crevice.

This section describes a feature planned for Bedrock Edition.
It has not appeared in any development versions yet, but is planned to be included in Bedrock Edition 1.18.0.

This section describes content that exists only in outdated versions of Java Edition.
This feature was added in a previous snapshot, but has been temporarily removed in the latest one. It is planned to be added back in a later version.

Crevices, also called crack carvers, are deep, long cracks in the ground that are thinner and straighter than canyons and can reach over 90 blocks in depth. 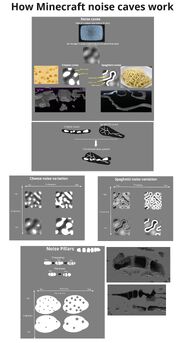 The mechanism of noise cave formation (except aquifers).[2]

This section contains content on features that are part of Experimental Gameplay in Bedrock Edition.
These features may be properly added in a future update, but requires the "Caves and Cliffs" option toggled to be enabled in the current version.

This section describes content that exists only in outdated versions of Java Edition.
This feature was added in a previous snapshot, but has been temporarily removed in the latest one. It is planned to be added back in a later version.

Noise caves are generated using noise generator. They come in the form of cheese caves, spaghetti caves, and aquifers.[3]

Cheese caves are pocket areas of the underground that come in various sizes. Spaghetti caves are long, narrow caves that wind their way through the underground and are a bit similar to small or medium original caves. Noodle caves are a thinner and squigglier variant of spaghetti caves‌[Java Edition only]‌[upcoming: JE 1.18]. There are also noise pillars inside cave blobs.

When generating noise caves, the game firstly generates a random noise field, and "smudge" it using a mathematical trick called Perlin noise. These processes then results in a 3D noise image. For cheese caves, the black part of noise image becomes stone, and white part becomes air, making it look like a cheese with many blobs. For spaghetti and noodle caves, the edge of black and white part becomes air, making it look like long and thin spaghetti or noodles. Cheese caves offer large and open spaces, while spaghetti and noodle caves provide channels for connection. The three types of caves are combined to form a complete cave system.

By adjusting noise frequency, hollowness (for cheese caves), and thickness (for spaghetti caves, noodle caves‌[Java Edition only], and noise pillars), noise caves can become diverse from each other.

An aquifer, taking the form of a fully flooded cave.

Magma blocks may appear at the bottom of aquifers, creating bubble columns.[3]

Because they are filled with water instead of air, aquifers can be a good place to find ores which generate with reduced or no air exposure. More than one blob of diamonds may spawn in one aquifer.

Glow squids and axolotls often spawn in aquifers. Aquifers under ocean biomes may also have fish mobs spawn in them.

Aquifers below Y=0 may generate filled with lava instead of water.

Found in every part of the world, underground water lakes are the most common type of lake. Water lakes may generate 1–20 blocks below the surface, are often visible from the surface and not particularly difficult to come across, and can generate all the way to bedrock level.

Example of an underground lava lake.

These are similar to water lakes, and can generate at all layers. Blocks of stone usually generate around these.

Example of an underground lava ocean.

Similarly to how water oceans replace all air blocks below a certain altitude on the surface, when deep enough in a cave (levels 1-10), all blocks that would generate as air instead generate as lava.

Issues relating to "Cave" are maintained on the bug tracker. Report issues there.