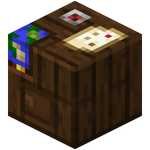 A cartography table is a cartographer's job site block that generates in villages. It is used for cloning, zooming out and locking maps.

A cartography table can be obtained with any tool, including the player's hand, although using an axe is most efficient.

Cartography tables can generate naturally inside cartographer houses in villages.

Cartography tables are used for cloning, expanding, locking (making them unable to be explored further), and zooming out maps. Cartography tables can also be used for adding pointers to maps, creating empty maps and renaming maps.‌[Bedrock Edition only]

Below is a list of the recipes available with the cartography table:

Zooming out a map always starts with an existing map, not a blank map. Zooming it out clears the image but leaves the map aligned to the grid that would include the area of the original map. To build a set of maps such as for a map wall, a player cannot create several level 0 (base) maps at one location then zoom them out before going out into the world to fill them in; the player must start with a base map created in each area to be covered by the zoomed out map. See more discussion of map alignment at Map.

If a village has a cartography table that has not been claimed by a villager, any nearby villager who hasn't chosen a job site block has a chance to change their profession to cartographer.

A cartography table can be used as a fuel in furnaces, smelting 1.5 items per block.

Cartography tables can be placed under note blocks to produce "bass" sound.

Issues relating to "Cartography Table" are maintained on the bug tracker. Report issues there.