Edit
watch 28:07
Minecraft Interactive Experience
Do you like this video?
Play Sound
Campfire 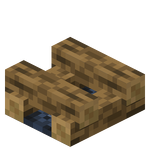 A campfire is a block that can be used to cook food or act as a light source or smoke signal.

A soul campfire is a variant of the campfire with turquoise flames.

Campfires can be mined with any tool, or without a tool, but axes are the fastest. A regular campfire drops 2 charcoal, a soul campfire drops soul soil, and either one also drops any items placed on it. If mined with a tool enchanted with Silk Touch, the campfire instead drops itself as an item.

In Bedrock Edition, either kind of campfire can also be broken by pushing it with a piston or sticky piston. Pistons cannot move or break campfires in Java Edition.

Campfires can generate in taiga and snowy taiga‌[BE only] villages.

Campfires also generate in camps inside ancient cities, beneath a pile of blue, light blue and cyan wool blocks.

In Bedrock Edition, apprentice-level fisherman villagers have a 50% chance of selling a campfire for 5 emeralds.

In Java Edition, apprentice-level fisherman villagers have a 2⁄3 chance of selling a campfire for 2 emeralds.

Campfires are lit by default when placed. Campfires can be manually lit by using or dispensing flint and steel on them, shooting it with a flaming arrow, or using or dispensing fire charges, blaze fireballs, and ghast fireballs when /gamerule mobgriefing is true. In Bedrock Edition, campfires can also be lit by using an item enchanted with fire aspect, or stepping on it while burning.

Using flint and steel on the side of a waterlogged or lit campfire sets the adjacent air block on fire instead.

Any items cooking on a campfire always drop when the campfire block is broken.

Campfires produce smoke particles that float up around 10 blocks before disappearing. If a hay bale is placed below, the campfire becomes a signal fire and the smoke floats up 24 blocks instead.

Campfires also emit occasional ember particles, similarly to lava. Soul campfires do not emit embers because they are blue.[2]

Campfires damage mobs standing on top of them even if underwater (with exceptions such as shulkers, zombified piglins or guardians), but only if lit, campfires deal 1

of damage every tick (although damage immunity reduces this to once every half-second). It also adds 160 fire ticks (8 seconds of burning).‌[Bedrock Edition only] In Java Edition, campfires do not cause lasting burning or destroy items. Damage taken is considered fire damage and is reduced by armor (which loses durability), the Resistance potion effects, and the Protection and Fire Protection enchantments. The player can avoid being damaged at all, either by using a potion of fire resistance or wearing Frost Walker boots. Crouching on a campfire also prevents damage.‌[Bedrock Edition only] In Bedrock Edition, campfires do not cause armor pieces to lose durability while the player is standing on it. [needs testing]

Regardless of height, all blocks prevent damage done to mobs or players above campfires. The campfire deals damage only to entities occupying its block.

The player can place raw food on a lit campfire by using the food item on it. Up to four food items can be placed on a single campfire, which cooks the items simultaneously. Unlike other blocks that can cook food, campfires do not require any kind of fuel to cook. On a campfire, foods produce small smoke particles, indicating they are being cooked. Food items take 30 seconds (600 ticks) to cook, compared to 10 seconds for furnaces or 5 seconds for smokers. Assuming that one uses all four slots to cook at once, the Campfire is, therefore, more efficient than furnaces (taking 10 seconds less per four items and no fuel) for cooking, but must be watched so as to pick up the food and refill it once it is done. It is slower than a smoker by about ten seconds, but its lack of fuel consumption could be seen as a worthwhile trade-off. Once finished cooking, items pop off the campfire. If the campfire is extinguished while cooking food, it resets as if it had not been cooked at all. Food items can be placed on an unlit campfire.

Other items can be placed on campfires using external editors, mods or add-ons.

Campfires do not have an external inventory. Raw food cannot be loaded into the campfire with a hopper.

A hopper placed directly underneath a campfire pulls through any items dropped into the campfire. Any drops from a mob that dies in the campfire get pulled into the hopper.

Placing a campfire under a beehive or bee nest allows players to harvest honey bottles or honeycomb without provoking the bees. There must be unobstructed air between the campfire and the beehive or bee nest. Carpets are an exception.‌[Java Edition only]

Lit soul campfires repel piglins that are not currently attacking. This occurs when the piglin is within an 8 block radius of the soul campfire.

Campfires can be placed under note blocks to produce "bass" sounds.

In Java Edition, pistons do not interact with campfires. Campfires neither move nor break when pushed or pulled by pistons.

A campfire has a block entity associated with it that holds additional data about the block.

Issues relating to "Campfire" are maintained on the bug tracker. Report issues there.