Edit
watch 28:07
Minecraft Interactive Experience
Do you like this video?
Play Sound
This article is about the entity. For the view, see Third-person view.

This feature is exclusive to Education Edition.

This article describes content that has been officially made unobtainable in Bedrock Edition.
It can still be obtained using third-party software. However, this can cause unexpected behavior such as bugs and crashes.
Camera 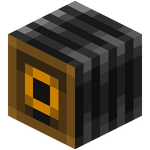 The camera is an entity that is capable of capturing and storing images. In Education Edition, it works together with the portfolio item to create collections of photos.[1]

Using a camera from one's inventory captures a first-person screenshot. It may also be placed, creating a camera entity that can track the user, and take pictures from the camera's perspective. Photos that are taken with the camera appear in the portfolio.

Close-up snapshots of an item on the ground can be taken by holding the Shift key while right-clicking.

Photos that are taken with the camera block are stored in %localappdata%\Packages\MinecraftUWP_8wekyb3d8bbwe\LocalState\screenshots.

At the Minecraft Pocket Edition panel at MineCon 2012, as well as one of Jbernhardsson's livestreams, it was stated that future plans include trying to have a proper use for cameras, perhaps an easier way to take screenshots and share them with others.[6] In the BlockTalk Q&A, the camera was briefly mentioned as part of a broader "sharing" theme planned for Bedrock Edition in the future.[7] It later got implemented into Education Edition, using the camera to make screenshots and share them in a special book.

Issues relating to "Camera" are maintained on the bug tracker. Report issues there.