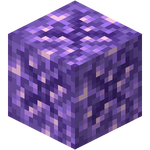 Budding amethyst is a block found in amethyst geodes that grows amethyst clusters.

Budding amethysts can currently be obtained via the Creative inventory or with commands, as they are unobtainable by Survival means, even using a tool enchanted with Silk Touch.

Budding amethyst cannot be obtained when mined, even using a tool enchanted with Silk Touch. It breaks immediately if pushed by a piston or sticky piston, and cannot be pulled by sticky pistons.

An amethyst bud placed on a budding amethyst (rather than any other block) regardless whether it was placed by the player or spawned by the budding amethyst itself grows over time, going through three growth stages – small, medium, and large – before reaching its 4th and final growth stage as an amethyst cluster, which drops amethyst shards when mined.

In Java Edition, the below logic can be applied:

As such, the math can be applied if a player is within random tick range as:

Uniquely among other blocks a budding amethyst makes a quiet overlay sound when generally interacted with as well as its block breaking sound when hit with a projectile.

Issues relating to "Budding Amethyst" are maintained on the bug tracker. Report issues there.