Edit
watch 28:07
Minecraft Interactive Experience
Do you like this video?
Play Sound
Bucket of aquatic mob 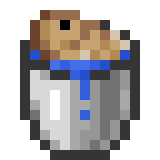 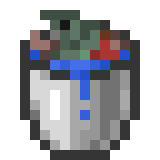 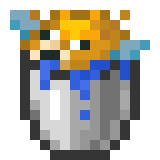 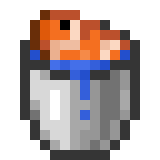 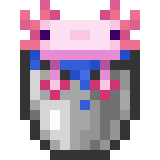 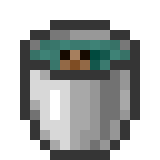 A bucket of aquatic mob is a form of a water bucket with an aquatic mob (a fish, axolotl, or tadpole) inside.

A bucket of aquatic mob can be obtained by using a water bucket on an applicable mob. Once a water bucket is used, the mob is picked up along with the water source block. The mob bucket obtained corresponds to the mob picked up.

Wandering traders have 1⁄6 chance to either sell a bucket of pufferfish or a bucket of tropical fish for 5 emeralds.

Novice-level Fisherman villagers have a 50% chance to sell a bucket of cod for 3 emeralds.

Pressing use with a bucket of aquatic mob places a water source block, and spawns the mob back into the world, leaving an empty bucket in the player's inventory. For buckets of tropical fish, the fish and its details (color, size, name) are kept. Placing a bucket of aquatic mob in the Nether causes the same particles to appear that generate when a normal water bucket is placed in the Nether, and the fish is spawned alone.

Mobs caught in buckets then released do not despawn, unlike mobs that spawn naturally in their aquatic environments.

If a bucket of aquatic mob is inside a dispenser, the dispenser spawns the mob and water block in front of it upon activation, leaving an empty bucket inside. Dispensers cannot pick up mobs with water buckets (the bucket is emptied).

If a bucket of aquatic mob is named a certain name through an anvil, the mob inside display that name as if it were named with a name tag, making fish, axolotls, and tadpoles the only mobs that can exist in item form, and be named without a name tag.‌[Java Edition only] Alternatively, if a named mob is captured with a bucket of water, the resulting mob bucket shares a name with the captured mob.‌[Java Edition only] If a named mob is captured in Bedrock Edition, the item is called "Bucket of <Name>".

Tropical fish also have assigned names that can be seen after capture. In Java Edition, the smaller text under the item name is displayed showing the fish name, similar to the text that displays enchantments under enchanted items. In Bedrock Edition, the item name is displayed showing "Bucket of <fish name>". Their colors are mostly named according to the colored block names, though with a few exceptions:

The base color comes first, and if the pattern color is different, it comes after that. Lastly, the fish bucket is given a name according to the shape and pattern of the fish:

Some tropical fish don't follow the normal naming system, and instead, reference real-life fish species. Apart from these names, these types of fish aren't different from regular tropical fish in terms of design or behavior.

A bucket of tropical fish purchased from a wandering trader or pulled from the Creative inventory spawns random tropical fish when used, due to it having no associated NBT.

In Bedrock Edition, if an axolotl is picked up with a bucket, the bucket appears in the player's inventory as "Bucket of <Baby/Adult> <Color> Axolotl" based on the age and color of the axolotl. These varieties are:

When the player spawns in an axolotl with a Bucket of Axolotl from creative inventory, it is always a leucistic adult. Buckets containing other variants will always spawn that variant when used in creative mode.

The bucket of axolotl does not change textures in the inventory to reflect the captured axolotl's color, it always appears leucistic.

Normal buckets of fish use only the BucketVariantTag tag to store the variant of any tropical fish that is picked up, and the item's display name to store the fish's custom name.