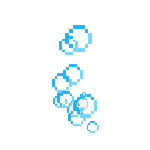 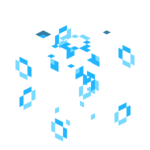 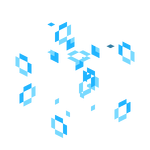 A bubble column is a block generated by placing magma blocks or soul sand in water (source). Bubble columns push or pull entities and items in certain directions.

Bubble columns cannot be obtained as an item,‌[Java Edition only] and can be placed only by a block-placement command such as /setblock.

In Bedrock Edition, it may be obtained as an item via inventory editing, add-ons, or bugs.

When generating the world, caves, aquifers and underwater ruins generate below the water surface. All bubble columns generate bubble column blocks until the column reaches the surface of the water or a solid block above the magma block.

When a magma block is placed underwater, a whirlpool bubble column is generated.

When soul sand is placed under source water blocks, an upward bubble column is generated.

A whirlpool, or downward bubble column, is the most common type that generates in the Overworld, often originating from magma at the bottom of underwater canyons. A whirlpool can be identified by the presence of air bubbles wandering downward. They drag entities downward. A boat ridden over a whirlpool shakes and eventually sinks if kept above the whirlpool for too long. A whirlpool has a vertical range of 86 blocks.

Upward bubble columns can be identified by the presence of vertically rising air bubbles. An upward bubble column accelerates entities upward. The longer an object rises through the bubble column, the faster it travels. At high enough speeds, players and entities can be launched out of water by several blocks. Sitting on the surface above a rising bubble column causes entities to bounce upward repeatedly by about 1 block.

The following content is transcluded from Technical blocks/Bubble Column.

Issues relating to "Bubble Column" are maintained on the bug tracker. Report issues there.