For the item, see Brick (Item).
For the Nether variant, see Nether Brick.

Bricks are used for aesthetic and building purposes. They are blocks that will not naturally spawn in the world, so they must be crafted. They are mostly used to up the aesthetic appeal of homes and towers. Since bricks are not flammable, they are often used to make fireplaces or fireguards. Brick blocks are made by putting clay balls in a furnace and then crafting the bricks in a 2×2 square. Bricks are durable blocks and resist explosions well. A Pickaxe must be used to recover the resource of a placed block and will take under a second to break. Breaking a block with a player's hand is slow and will not yield the resource. Bricks have a blast resistance of 30.

Clay can be used to make bricks or clay blocks. Breaking clay drops 4 clay balls, which can then be smelted into clay bricks. The 4 clay bricks can then be crafted into one brick block. This means that for each clay block found in a map, players can make 1 brick block. 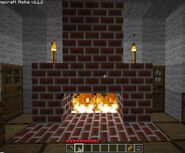 The old texture for brick blocks
Add a photo to this gallery
Retrieved from "https://minecraft.fandom.com/wiki/Bricks?oldid=189103"
Community content is available under CC-BY-SA unless otherwise noted.