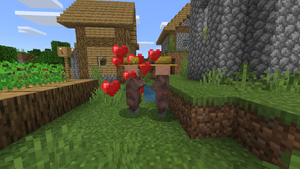 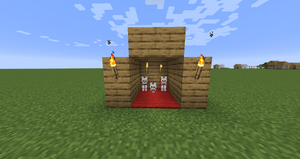 A baby wolf with its parents.

Breeding is a game mechanic that allows mobs of the same species to breed with each other to produce offspring. 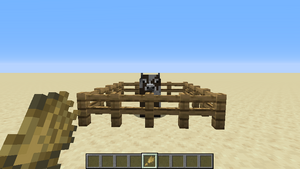 A cow following the player.

Each animal that can be bred has a food item used to lead and breed it (there are a few special cases, described below). Once an animal notices a player holding its food, it follows the player until either the player is out of range, the player stops holding the item, it begins the breeding process, or it is attacked. This includes baby animals. Note that animals are uninterested in food lying on the ground. One item per parent is needed to breed a single baby.

When an animal is fed its food, it enters "love mode," preparing to breed with another animal of the same species that is also in love mode. Animals that are in love mode emit heart particles constantly. When both animals are fed, they pathfind toward each other, up to eight blocks away. The two animals "kiss" for about two and a half seconds, and then a baby animal of the same species spawns either in between the parents or in the same position as the parent that was spawned first, ending love mode for the parents. Breeding also drops 1–7. The parents will not eat breeding items for 5 minutes, after which feeding them once again causes them to enter love mode. However, they still follow players holding breeding items, as does the baby. An animal exits love mode if it does not breed 30 seconds after being fed; however, it immediately becomes able to be fed and enter love mode.

Villagers do not breed automatically when given food. Villager breeding depends on both the number of valid beds in the area (see the village page for full details), as well as whether the villagers are "willing." A villager may become willing if they have 3 bread, 12 carrots, 12 potatoes, or 12 beetroots in their inventory. They may also become willing as a result of trading with a player. When they breed, they produce a smaller villager. Unlike many baby animals, baby villagers do not have big heads in Java Edition. Baby villagers run around the village, and can "play" tag. A baby villager killed by a zombie may produce a baby zombie villager, depending on difficulty.

A player may want to know the number of mobs required in a farm to reach a certain goal, for example: to make a full-powered enchanting table with bookshelves (46 leather needed) or for full leather armor (24 leather), in case the player has a cow farm. There is a formula to calculate how many mobs needed to have in a farm, by the starting number and if the player waits until all the mobs become mature (this does not apply to villagers):

is the number of mobs at generation

is the floor() operation.

When using larger values of n, it may be easier to approximate the number of mobs using an exponential function to avoid doing too many recursive calculations:

where the input is the n-th generation and the output is the approximate number of mobs after breeding. The constant

Alternatively, if the player starts with

mobs and wants to reach a population of at least

, it can be achieved in

is the ceil() operation. 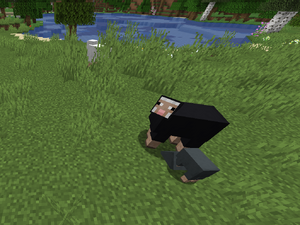 An example of how a bred sheep inherits a mixture of its parents' colors when possible.

Baby animals are smaller variations of their parents, having small bodies, relatively big heads, higher-pitched sounds, and faster walking speeds. Lambs cannot be sheared for their wool, chicks do not lay eggs, calves and mooshroom calves cannot be milked, and horses, mules, donkey foals, and piglets cannot be ridden. Baby animals follow one of their parents (within 8 blocks) until they grow up (if the parent dies or there is none, they pick a nearby adult of their kind. Excluding baby rabbits[2] and baby wild wolf, baby ocelot, stray kitten, baby turtle[3] In Java Edition). Tamed pups and kittens follow their owner if the parent is absent or sitting, and pups attack aggressive mobs just as a mature wolf would. They do not drop loot or experience if killed (excluding baby zombies and baby zombified piglins).

When born, baby animals choose and follow a nearby adult of the same species, regardless of whether it is their parent. Babies can choose new targets to follow whenever they don't have a valid target, for instance if the previous target dies or moves further than 16 blocks away(Excluding baby rabbits[2]and baby wild wolf, baby ocelot, stray kitten, baby turtle[3] In Java Edition).

When lambs are born, they usually inherit the color of one of their parents, chosen at random. However, if the parents have "compatible" colors (meaning that their corresponding dye items could be combined into a third dye), the lamb inherits a mix of the parents' colors (see Dye). This holds even if one or both of the parents have just been sheared before breeding and have not yet grown their coats back. In Bedrock Edition, however, lambs do not inherit the combined colors of their parents.

Baby animals can be manually spawned by using spawn eggs on a grown animal. This also works on zombies or variants.

Baby animals may also be spawned using the /summon command with a negative Age tag; for example, using /summon sheep ~ ~ ~ {Age:-100} spawns a baby sheep at the player's position, that matures in 100 ticks. For zombies and piglins, the IsBaby:1 tag is used instead. 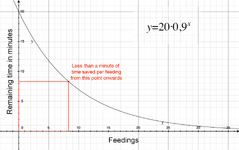 Baby animals take 20 minutes to grow up. This can be accelerated by feeding them their breeding item. Green sparkles appear similar to those caused by bone meal. Each feeding reduces the remaining time before the animal grows up by 10%. The less time remains, the less time is saved by each feeding, making it inefficient to feed an animal continuously until it becomes an adult. After the ninth feeding, the time saved by one feeding is less than a minute, as shown in the graph. Horses, donkeys, and llamas have different mechanics: different breeding items grow babies by different amounts, and each item ages babies by a constant time rather than a percentage of the remaining time.

Any baby mob that counts towards the Monster Hunter, Monsters Hunted advancement is considered a monster and belongs here. Out of all these monsters, only hoglins can be bred, and can grow up into its adult form. The rest of these baby monsters will never grow up.

Villagers are produced from breeding, but do not count as animals or monsters. Undead horses are passive non-monsters and non-animals, and baby undead horses do not grow up.

Issues relating to "Breeding" are maintained on the bug tracker. Report issues there.