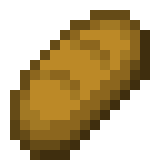 Farmer villagers may use wheat they have harvested to craft bread, which they can trade with other villagers.

Farmer villagers may throw bread at players under the Hero of the Village effect.‌[Java Edition only]