From Minecraft Wiki
Jump to: navigation, search
For the item in Minecraft Dungeons, see MCD:Bread.
Bread 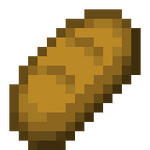 Villager farmers may use wheat they have harvested to craft bread, which they can trade with other villagers.