Edit
For other uses, see Bow (disambiguation).
For the ranged weapon of a similar name, see Crossbow.
Bow 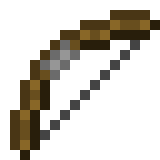 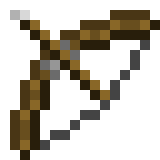 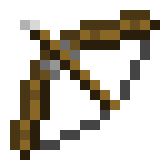 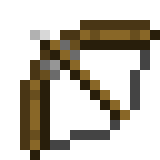 A bow is a ranged weapon that shoots arrows.

Skeletons and strays have an 8.5% chance of dropping a normal or enchanted bow on death when killed by the player.

The chance of being enchanted depends on the difficulty, whether it is normal or hard. The enchantment level is equal to enchant level 5-22.

Bows of skeleton traps are always enchanted at level 5 to 23. The exact level depends on regional difficulty, as on Easy it is always a level-5 enchantment.

The enchantment level is equal to enchant level 5–19.

Bows have a chance of being caught by fishing. When caught, the bow may be damaged and contain random enchantments equivalent to a level 30 enchantment from an enchantment table, including treasure enchantments like Mending. 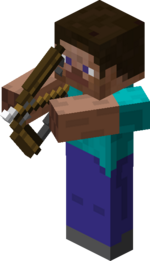 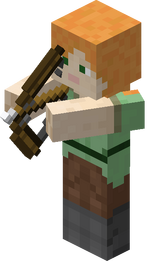 Bows can be drawn back by using them. In order to use a bow, the player must have at least one arrow in their inventory or be in Creative mode. While the bow is being charged or remains fully charged, the player is forced to move at sneaking speed, unless they are riding a horse, minecart or boat, or flying with elytra. The arrow that is shown inside the bow always looks like a regular arrow, regardless of what kind of arrow is actually being shot from the bow.[1]

When drawing a bow, the display zooms in slightly. Charging the bow to its maximum causes it to visually shake as an indicator. Releasing the button shoots an arrow. A white sparkling effect signifies a fully charged shot. The damage dealt can ultimately be less than the maximum damage if the arrow slows down after being shot. Drawing a bow can be canceled by switching to another hotbar slot while holding use.

While the bow is being drawn or held while drawn, movement is slowed. It is not possible to sprint while charging a bow or holding a drawn bow. When the bow is released, normal motion resumes although any prior sprint is cancelled.

If the arrow hits another player, it makes a high-pitched "ding" sound.‌[Java Edition only]

is the damage after any enchantments. The listed values below describe maximum damage from a bow with no Power enchantments, assuming the target is at a distance where drag and gravity are negligible. However, the critical damage is likely to be more around 8-10; critical damage is added at a random value between

and it is rare to have minimum or maximum values.

Damage caused by the arrow is not affected by the Strength status effect.

Endermen cannot be shot using an arrow, because the arrow either disappears as the enderman teleports, or it gets deflected. Even while immobile, the enderman is immune to damage from arrows. However, an arrow shot from a bow enchanted with Flame can ignite the enderman.

Bows can receive several different enchantments and have a base enchantability of 1. Bow enchantments have no effect on arrow speed or distance. If a bow is enchanted with any level 1 enchantment, it always gets Power I.[verify]

A bow can be used as fuel in furnaces, smelting 1.5 items per bow in Java Edition or 1 item per bow in Bedrock Edition.

As in real life, a flying arrow in Minecraft is affected by gravity. Its vertical speed is modified by one block downward every second, resulting in a parabolic flight path. An arrow slows down if shot through water, reducing its damage to near zero unless brought back into the air or otherwise given momentum.‌[Java Edition only]

Arrows that hit solid blocks become stuck and can be retrieved, unless the arrow was shot by a bow enchanted with Infinity, a player in Creative mode, or a mob.

An arrow shot through lava ignites, giving it the effect of the Flame enchantment, igniting any entity it hits. If not extinguished, the fire inflicts up to 4

damage. Although a wither skeleton does not spawn naturally with bows, if it holds a bow then it also shoots flaming arrows.

Issues relating to "Bow" are maintained on the bug tracker. Report issues there.