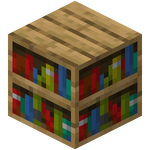 Bookshelves are blocks that enhance enchanting with an enchanting table.

Bookshelves can generate in village libraries and sometimes village houses.

Bookshelves can be broken fairly easily by hand, but can be broken faster by using an axe. In either case, they drop 3 books when broken, allowing the reconstruction of the bookshelf with the addition of six wood planks. When broken by an item that is enchanted with Silk Touch, a bookshelf drops itself.

Novice-level librarian villagers have a 50% chance to sell 1 bookshelf for 9 emeralds as part of their trades.‌[Bedrock Edition only]

Novice-level librarian villagers have a 2⁄3 chance to sell 1 bookshelf for 9 emeralds.‌[Java Edition only]

Bookshelves can be used as a fuel in furnaces, smelting 1.5 items per block.

Librarian villagers can interact with bookshelves.

Bookshelf can be placed under note blocks to produce "bass" sounds.

Issues relating to "Bookshelf" are maintained on the bug tracker. Report issues there.