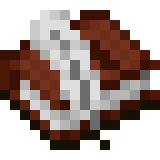 A book and quill is an item used to write written books.

By pressing use item or long pressing screen anywhere‌[Bedrock Edition only] while holding a book and quill in their hand, the player can open a text editor GUI.

The player has the ability to copy and paste into books. However, the paste does not work if the text being pasted is longer than a single page. Most Unicode characters are available in books, and they may be pasted in without issue.

In singleplayer, the world pauses while a book is being edited.‌[Java Edition only]

One can place a book and quill or a written book on an empty lectern.

The lectern then emits a redstone signal depending on the displayed page in the book. On the last page, the lectern emits a signal strength of 15. This is why lecterns are listed in the "redstone" tab in the creative inventory.

Text in a book can be styled using codes starting with the § character (section sign).

If the player uses multiple codes, and continue typing past the end of a line, the next line exhibits only the last formatting code used.

The title of the book can be up to 16 characters long, and the player cannot paste into a title. A "workaround" for the 16-character limitation is to manually rename the book at an anvil, which always costs 1 experience level. This can be done with either a written book or a book and quill – both versions will always display the changed name. If a custom name is removed from a written book, it will revert back to the title it was given during the signing process.

Expert-level librarian villagers buy a book and quill for one emerald. ‌[Bedrock Edition only]

Expert-level librarian villagers have a 50% chance to buy 2 book and quills for one emerald.‌[Java Edition only]

Issues relating to "Book and Quill" are maintained on the bug tracker. Report issues there.