From Minecraft Wiki
Jump to: navigation, search
This article is about the item. For the block, see Bone Block. For other uses, see Bone (disambiguation).
Bone 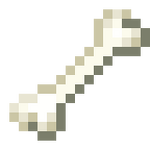 A bone is an item primarily obtained as a drop from skeletons and their variants.

Skeletons, wither skeletons, skeleton horses, and strays may drop 0–2 bones upon death. The maximum drop is increased by 1 per level of Looting, for a maximum of 0-5 bones with Looting III.

Bones can also be obtained by fishing as part of the junk category. The best chance of catching a bone is achieved without the Luck of the Sea enchantment, yielding a 1.1% chance.

While a bone cannot be equipped in the head slot in Survival mode, equipping it using commands causes it to appear in the player's mouth.

Using a bone on a wild wolf has a 1⁄3 chance of taming it. Bones cannot tame a hostile wolf or a wolf that has already been tamed. However, bones can be used to attract the attention of the tamed ones.

A bone can be crafted into 3 bone meal.

Issues relating to "Bone" are maintained on the bug tracker. Report issues there.