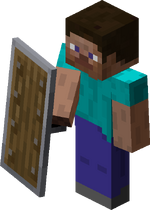 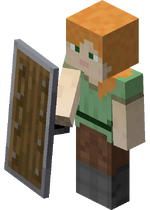 Blocking is a gameplay mechanic that allows players to block several forms of damage.

Shields are used for blocking incoming attacks. Using one causes the player to slow to a sneaking pace, and after five ticks (0.25 seconds) blockable attacks and knockback coming from the front of the player are negated. Any effects from the attacker (e.g. wither or fire) do not afflict the defender. A successful block is indicated by a sound and the shield taking damage.

Blockable attacks include melee attacks, all non-magical projectiles, damage from Thorns, and some explosions. Creeper explosions or TNT ignited by another player are blockable, but TNT ignited by the player or by a redstone mechanism are not. Shields have no effect on other types of damage, such as fall damage and drowning.

Shields are used for blocking incoming attacks. Crouching (sneaking, flying downward, or moving downward in water) activates the shield. Shields also automatically activate when riding mobs, and there is no way to prevent the shield from being activated when riding mobs.

Issues relating to "Blocking" are maintained on the bug tracker. Report issues there.