Edit
This article is about the mineral block. For the Minecraft Dungeons mob, see Redstone Cube. For other uses, see Redstone (disambiguation).
Block of Redstone 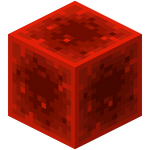 A block of redstone is a mineral block equivalent to nine redstone dust. It acts as a permanently powered redstone power source that can be pushed by pistons.

A block of redstone can be used as a redstone power source and can be crafted back into redstone. It can also be used as storage if the player's inventory is full of redstone dust from mining.

Blocks of redstone can be crafted back into redstone, and thus provide compact storage for redstone like other blocks of minerals (block of iron, block of gold, etc.).

To place a block of redstone, use the Place Block control.

Blocks of redstone are always active and cannot be turned off. A block of redstone:

Adjacent opaque blocks are not powered.

Issues relating to "Block of Redstone" are maintained on the bug tracker. Report issues there.