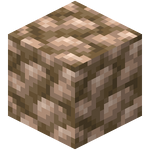 A block of raw iron is a raw metal block equivalent to nine raw iron.

Raw iron blocks can be found rarely inside of huge ore veins below Y=0.

Blocks of Raw Iron can be mined only with a stone pickaxe or better.

Blocks of raw iron are a compact way to store raw iron.

Issues relating to "Block of Raw Iron" are maintained on the bug tracker. Report issues there.