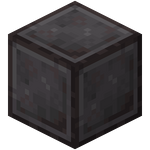 A block of netherite is a precious metal block made from nine netherite ingots. Unlike most items, it is resistant to fire and lava.

Blocks of netherite can be mined only with a diamond or netherite pickaxe. If a netherite block is mined with anything else, it drops nothing.

Blocks of netherite can be used to store netherite ingots in a compact fashion.

A single block of netherite is enough to upgrade a full set of diamond armor and five diamond weapons or tools.

Blocks of netherite have a blast resistance of 1,200, the same as obsidian, crying obsidian, ancient debris, respawn anchor, and enchanting tables. Unlike obsidian, blocks of netherite (and ancient debris) can be moved with pistons, which makes it useful in redstone builds. Furthermore, blocks of netherite have a hardness of 50, the same hardness as obsidian, crying obsidian, and respawn anchors. This makes it the hardest block to be able to be pushed by a piston. However, these blocks can be destroyed by explosions while being pushed or pulled by pistons.‌[Java Edition only][1] They can also be destroyed by explosions when in item form, which has been confirmed to be intentional.[2]

It can be destroyed by a wither's blue skulls and on contact with a wither.

Issues relating to "Block of Netherite" are maintained on the bug tracker. Report issues there.