View source
This article is about the mineral block. For the ore, see Iron Ore. For the item, see Iron Ingot. For the nugget, see Iron Nugget. For the raw variant, see Block of Raw Iron.
Block of Iron 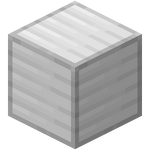 A block of iron is a precious metal block equivalent to nine iron ingots.

Blocks of iron can be mined only with a stone pickaxe or better. If an iron block is mined without the use of a pickaxe, it drops nothing.

Blocks of iron can be used to store iron ingots in a compact fashion.

Blocks of iron can be used to "power" a beacon. The beacon can be powered by a 3×3 square of iron blocks underneath it, and can optionally also include a 5×5, 7×7 and 9×9 layer in the shape of a pyramid under the original layer to increase the effects from the beacon. The layers do not have to be entirely iron blocks, as they may also contain blocks of gold, blocks of diamond, blocks of netherite or blocks of emerald.

Blocks of iron can be placed under note blocks to produce iron xylophone sounds.

This section would benefit from the addition of more images.
Please remove this notice once you've added suitable images to the article.
The specific instructions are: The very first texture of iron block as shown in this image.

Issues relating to "Block of Iron" are maintained on the bug tracker. Report issues there.