Edit
This article is about the mineral block. For the ore, see Copper Ore. For the item, see Copper Ingot. For the raw variant, see Block of Raw Copper. For other uses, see Copper.
Block of Copper 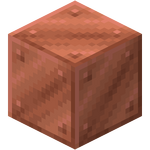 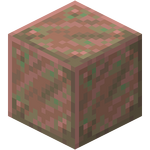 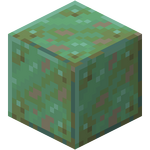 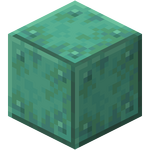 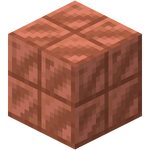 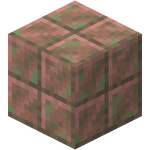 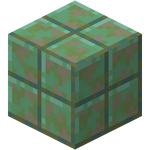 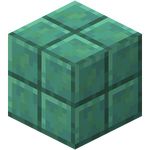 The block of copper is a decorative block that oxidizes over time, gaining a verdigris appearance. It can be crafted into a waxed version that has an identical appearance and does not oxidize. It can also be crafted back into nine copper ingots unless it is in a fully or partly oxidized state or has been crafted into the cut variant.

Blocks of copper can be mined only with a stone pickaxe or better. If a block of copper is mined without the use of a pickaxe, it drops nothing.

Unwaxed copper blocks have four stages of oxidation (including the initial normal state). Lightning bolts and axes can remove the oxidation on copper blocks.

The most efficient way of laying out the copper blocks for oxidation is in a 7×7×6 face-centered cubic (fcc)/cubic close-packed (ccp) lattice.

In Java Edition, these additional blocks are chosen by random walks as follows: The position of the struck copper block is set as the start point. Then, the game performs 3 to 5 walks. In the beginning of each walk, a judgment point is set at the start point. For each step of the walk, the game randomly selects 10 blocks from a 3×3×3 volume centered on the judgment point. If an unwaxed copper block is found among these 10 blocks, the judgment point is transferred to the first such block found, and 1 oxidation layer of that block is removed (if the block is still unoxidized, the block stays as it is). The number of steps in a walk is between 1 and 8 (inclusive), chosen randomly for each walk. This means that one single lightning strike can deoxidize up to 41 blocks (1 block initially struck by lightning + 5 max walks*8 max steps in every walk).[3]

This page would benefit from the addition of more sounds.
Please remove this notice once you've added suitable sounds to the article.
The specific instructions are: Wax on, Wax off

Issues relating to "Block of Copper" or "Cut Copper" are maintained on the bug tracker. Report issues there.