Edit
watch 28:07
Minecraft Interactive Experience
Do you like this video?
Play Sound
This article is about the mineral block. For the ore, see Coal Ore. For the item, see Coal.
Block of Coal 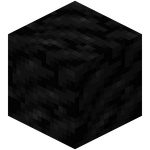 A block of coal is a storage block, equivalent to nine coal, that can also be used as fuel.

Blocks of coal can be mined using any pickaxe. If mined without a pickaxe, it drops nothing.

Blocks of coal can be crafted only from regular coal, not charcoal. It is crafted in the same way as other mineral blocks.

Blocks of coal are often used to store coal in a compact fashion, or otherwise used as a fairly cheap construction block.

Blocks of coal can be used as fuel in a furnace. One block of coal lasts 800 seconds (16000 ticks), which smelts 80 items. This is ten times the duration of a single piece of coal and 11⁄9 times as efficient (+11.11%) as nine individual pieces of coal—which would only smelt 72 items. The latter, however, prevents inactive furnace use; while smelting one item with one coal wastes seven potential items, smelting one item with one block of coal wastes 79 potential items.

Block of coal can be placed under note blocks to produce "bass drum" sounds.

Issues relating to "Block of Coal" are maintained on the bug tracker. Report issues there.