Edit
watch 28:07
Minecraft Interactive Experience
Do you like this video?
Play Sound
Blindness 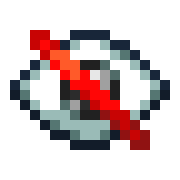 Blindness is a status effect that impairs the player's vision. It can be cast by illusioners‌[Java Edition only] or by consuming suspicious stew.

Blindness impairs the player's vision as if a thick black fog were surrounding them, with only the immediate area being visible (this means that only a few blocks directly around the player are visible to them). However, the sun and moon can be seen as normal, but it has to be during clear weather.‌[Java Edition only] Additionally, liquids do not fade into the fog perfectly. The effect also prevents the player from sprinting or inflicting critical hits, but does not stop an ongoing sprint. If combined with Night Vision, the screen appears completely black aside from the sun and moon.[1] From Java Edition 1.15 to Java Edition 21w08b, combining with night visions renders the HUD text black (this also happens on the title screen)[2]. In Bedrock Edition, it adjusts correctly: it keeps the black fog, and renders the visible area with night vision.

The effect can be removed by drinking milk. In Education and Bedrock editions when education options are enabled, drinking eye drops also removes blindness.

Additionally, wardens are only naturally blind mobs even without requiring the Blindness status effect, and it can be found in ancient cities.

Issues relating to "Blindness" are maintained on the bug tracker. Report issues there.