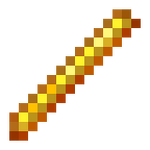 Blaze rods are items exclusively obtained from blazes. They act as an essential ingredient in potion brewing, as a fuel for both brewing and smelting, and for crafting the eye of ender that leads the player to the End dimension.

When killed by a player or tamed wolf, a blaze has a 50% chance to drop a blaze rod. The Looting enchantment can increase the drops by one per level, for a maximum of 4 blaze rods. Blazes do not drop any blaze rods if killed by any other source.

Note: This video does not mention the crafting of End Rods.

Issues relating to "Blaze Rod" are maintained on the bug tracker. Report issues there.