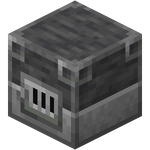 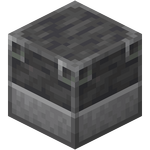 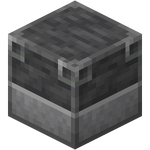 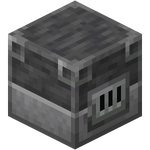 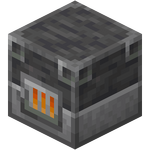 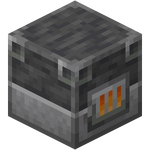 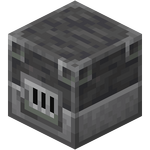 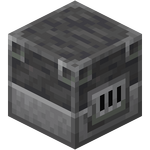 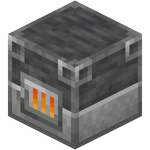 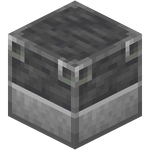 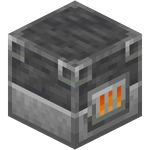 A blast furnace is a block that smelts ores, raw metals, iron and gold armor and tools, similar to a furnace, but at twice the speed. It also serves as an armorer's job site block.

A blast furnace can be picked up by any pickaxe. If mined without a pickaxe, it does not drop anything.

Blast furnaces can generate in any armorer house; these can be found in a village.

Blast furnaces can be pushed by pistons.‌[Bedrock Edition only]

Blast furnaces are similar to furnaces, but can smelt only raw ore, ore blocks and tools/armor made of iron, gold or chainmail. Blast furnaces serve as the counterpart to smokers, which are used mainly to cook food faster. Smelting equipment yields one iron or gold nugget from their respective materials. Once an item and a fuel are placed into the blast furnace, the block state changes to lit and the item is smelted twice as fast as a regular furnace. Fuel is also used at double the rate of regular furnaces, so the number of items smelted per fuel stays the same. The product can then be collected by using the output. Like normal furnaces, a hopper can be used to feed items into a blast furnace and can also pick up items from it.

If a village has a blast furnace that has not been claimed by a villager, any nearby villager who hasn't chosen a job site block has a chance to change their profession to armorer.

Blast furnaces emit a light level of 13 when active, similar to normal furnaces.

By default, the GUI of a blast furnace is labeled "Blast Furnace", but this name can be customized by naming it in an anvil before placing it, or by changing the CustomName tag using the /data command.‌[Java Edition only]

Blast furnace can be placed under note blocks to produce "bass drum" sound.

A blast furnace has a block entity associated with it that holds additional data about the block.

The following content is transcluded from Technical blocks/Lit Blast Furnace.

Issues relating to "Blast Furnace" are maintained on the bug tracker. Report issues there.