Edit
watch 28:07
Minecraft Interactive Experience
Do you like this video?
Play Sound
For the gilded variant, see Gilded Blackstone.
Blackstone 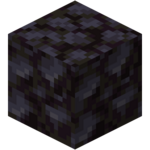 Blackstone is a dark-colored block that functions similar to cobblestone or cobbled deepslate. It can be found only in the Nether.

Blackstone generates naturally in the basalt deltas biome found in the Nether, anywhere underground, and below the surface of a lava sea.

Blackstone can be found as a part of bastion remnants.

Blobs of blackstone attempt to replace netherrack 2 times per chunk in blobs of size 0 to 160, from levels 5 to 31, in all Nether biomes except basalt deltas.

Blackstone can be acquired through bartering.

Blackstone cannot be used to craft dispensers, droppers, pistons, or other blocks that use cobblestone in their recipes. This is intended per MC-177904.

Blackstone can be placed under note blocks to produce "bass drum" sounds.

Issues relating to "Blackstone" are maintained on the bug tracker. Report issues there.