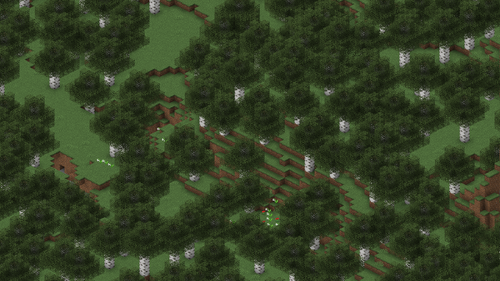 Birch Forests are lush temperate biomes, usually generating near other lush biomes. There are four variants in the biome family.

Birch forest biomes are quite hilly, featuring a vast amount of only birch trees across the landscape. They generate densely, but not densely enough to cast sufficient shadows to allow hostile mobs to spawn in daytime. Rose bushes, lily of the valleys, lilacs and peonies generate in these biomes commonly, as well as the usual dandelions and poppies.

Like almost every other land biome in the game, water and lava lakes can generate here, which may cause fast-spreading fires due to the density of flammable trees. Like forest, shallow lakes may also generate in here.

The grass and foliage color is turquoise, making them hard to distinguish from rivers, which often run across this biome.

No unique mobs or structures are found in this biome.

These biomes provide a source of wood and animal food, much like the main forest. Building shelter here might be frustrating, due to having to clean up the zone before and because of the reduced block palette that this biome offers compared to other biomes.

There are a total of four distinct birch forest biome variants.

Birch Forest Hills features a hillier terrain than regular birch forests, being identical to them in every other aspect. The size and shape of the trees and foliage are mostly the same. It is fairly common due to its wide spread. Birch forest hills use the same mob spawning chances as birch forests.

This section is missing information about MC-194200.
Please expand the section to include this information. Further details may exist on the talk page.