This page describes content that exists only in outdated versions of Minecraft.
This feature used to be in the game but has since been removed. 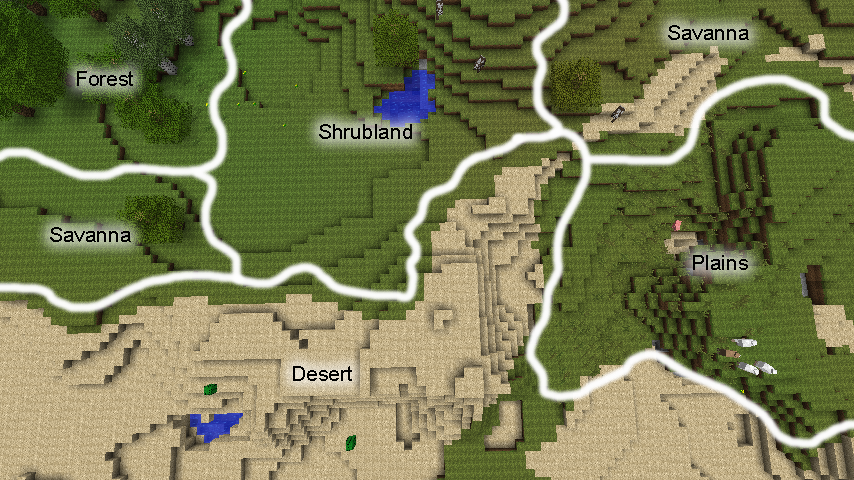 Before the Adventure Update, biomes were much smaller, sometimes smaller than a chunk, and less distinct.

Height variation was entirely independent of biome type, with biomes having no influence on the shape of terrain. This meant things like cliffs and mountains were able to generate up to nearly 128 on the y-axis in any biome. Tall grass was also much less present in pre-1.8 worlds (except in the "Plains" and "Rainforest" biomes).

There were 13 biome types: 10 in the Overworld, 1 in the Nether, and 2 unused ones that are in the code but aren't encountered in normal play. These biomes were added in Java Edition Alpha 1.2.0, and relatively few changes were undergone to these biomes other than the introduction of birch and spruce trees in Beta 1.2 (which allowed for new chunks to have birch trees generate in forests and spruce to generate in taiga in place of oak trees), desert biome borders being rotated due to then not lining up in Beta 1.4, and the introduction of tall grass and ferns in Beta 1.6.

Grass and foliage colors were determined by an algorithm based on the temperature and humidity, rather than from the biomes directly. This means there can be a wide range of different grass and foliage colors for any one biome. Once the game gets the temperature and humidity values by pulling grass and foliage colors, it uses said values to grab colors from /misc/grasscolor.png or /misc/foliagecolor.png, and applies it to the uncolored grass or leaves. The same implementation also existed for water colorization with /misc/watercolor.png. However, this feature wasn't enabled in the code, and wasn't implemented until Java Edition 1.13.

This section is missing information about range of tint colors in HEX.
(Each biome tint was dependant on the temperature, and so they didn't have a specific tint color).
Please expand the section to include this information. Further details may exist on the talk page.