A rare division of frozen biomes with dry biomes.

A basalt delta found in the Nether.

The temperature influences the shades of green for the grass or the blue for the water.

A biome is a region in a world with distinct geographical features, flora, heights, temperatures, humidity ratings, and sky and foliage colors. Biomes separate every generated world into different environments, such as forests, deserts and taigas.

Biomes have a temperature value that determines if the water freezes or if it snows or rains. The required temperature values are less than 0.15 for snow, and above 0.15 for rain. The temperature also drops 0.0016 (1⁄625) per meter above the default sea level (Y=64), but does not change below sea level. These values can be used to determine the heights that snow generates at in different biomes. For example, mountains generate snow at Y=95, due to their highland climate, as their temperature value is 0.2, the temperature affects only the transition from rain to snowfall. All the biomes in vanilla with a temperature above 0.95 (and by extent, all the dry biomes) are hardcoded to never have precipitation at any height or temperature. For example, savannas do not experience rain or snow due to their dryness. If a biome with a temperature above 0.95 is edited to allow precipitation through a data pack or mod, it simply behaves like a normal rainy biome.

Biomes are split into 5 categories based on their temperature: snow-covered, cold, temperate/lush, dry/warm and neutral. They are almost always separated during terrain generation to prevent biomes with huge temperature differences being placed side-by-side (such as a snowy taiga next to a desert), and to allow biomes with similar temperatures to be placed next to each other more often (such as forests and swamps).

Minecraft biomes are generated in layer stacks. These layers generate specific aspects of Minecraft biomes, such as scale, rivers, varieties and biome categories.

At this stage of biome generation, the final climate zones are applied as follows. Areas of dry landmasses are assigned to be a normal biome if it borders a cold or frozen landmass. Areas of snowy landmasses are assigned to the cold temperature category if it borders a normal or dry temperature zone. 1 out of every 13 landmasses is then marked as "Special", which would be used to place some of the rarer biomes in later stages of biome generation. This map is then scaled twice, until a scale of 1 to 256. An additional layer is applied to create a more jagged coastline, creating areas of large islands and lakes around the coastline. 1 out of 100 areas of oceans are assigned as mushroom biomes and areas of ocean far from the coast converted into deep ocean.

Generation of biomes and biome variants[edit]

Generation of rivers and hills[edit]

A layer stack for river noise generation is used as a random number generator to generate areas of hills and mutated biomes, which is scaled twice before applied to the biome stage of biome generation at scale 1 to 64. Since Update Aquatic, mutated biomes conform to an entire biome or can border a river. A separate layer stack to generate rivers throughout is scaled 4 times, before it is merged with the rest of the generation at scale 1 to 4. 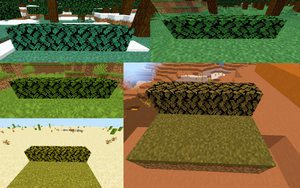 In these biomes, it always snows instead of rains and no matter the height; all sources of water exposed to the sky are frozen over. The foliage and grass is aqua and the water is purple.

In these verdant biomes, it begins snowing over the 256 block height limit, meaning snow does not generate naturally. Otherwise, it rains. The foliage and grass is a vibrant light green, except for swamps and dark forests, which have dark green grass. Rivers and birch forests are also exempt from this, as they have a dull aqua hue. The water is blue in this biome, except for the swamp biomes, which is grayish-green.

It is also called as "Tropical biome" for savannas, due to the temperature of the biomes.

A biome map tweeted by Notch.