From Minecraft Wiki
Jump to: navigation, search
This article is about the plant used for platforming. For the plant used to grow big dripleaves, see Small Dripleaf.

It has been suggested that this page be merged with Dripleaf. [discuss]
If this merge affects many pages or may potentially be controversial, do not merge the page until a consensus is reached.

This page contains content on features that are part of Experimental Gameplay in Bedrock Edition.
These features may be properly added in a future update, but require the "Caves and Cliffs" option toggled to be enabled in the current version.
Big Dripleaf 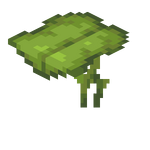 A big dripleaf is a plant intended to generate within lush caves. It is intended to be used as a block for parkour and platforming.

Big dripleaves naturally generate within lush caves biomes, which can be accessed only if the world type is single biome.

Bone meal can be used on a small dripleaf plant to turn it into a big dripleaf up to 5 blocks tall, as long as there is enough open space above it.

Big dripleaves can be obtained with any tool, but an axe is the intended tool. It also breaks when pushed with a piston or sticky piston.

Big dripleaves consist of any number of non-solid stem blocks atop of each other and a single leaf as the uppermost block, which can be stood on by any entity like a normal block for 1 second (20 game ticks). After this time, it tilts down, becoming lower than a block and giving a player warning that it is about to collapse. After a few ticks it tilts down and become temporarily non-solid. When the leaf is powered by redstone, it does not tilt or collapse, however. Powering the stem has no effect.

One-block tall big dripleaves can be used to make the player crawl. If a player is standing inside a big dripleaf when it is fully tilted, and the dripleaf returns to the untilted position, the player is left crawling underneath the leaf.

When directly hit with any projectile, the leaf immediately becomes temporarily non-solid. This cannot be prevented by powering it with redstone.

A big dripleaf can be placed only on top of a block. It is always one block tall when placed.

Issues relating to "Big Dripleaf" are maintained on the bug tracker. Report issues there.