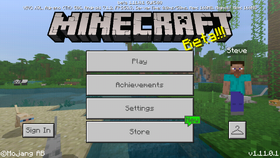 Beta 1.11.0.1 is the first beta version for Bedrock Edition 1.11.0, released on February 21, 2019,[1] which adds illager banners, illager captains, pillager patrols, raids, and the Bad Omen and Hero of the Village status effects.