Edit
watch 28:07
Minecraft Interactive Experience
Do you like this video?
Play Sound
v1.7.0 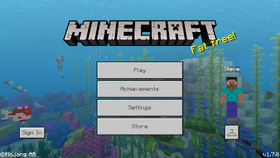 For a guide about all content in this release and the other releases of 1.7, see Bedrock Edition guides/1.7 releases.

1.7.0 is a major update to Bedrock Edition released on October 15–16, 2018.[citation needed] It adds the /scoreboard command, the ability to eat food in Creative mode and Peaceful difficulty, The Hive multiplayer server, and highlights for player names in the chat, and also fixes bugs.