Edit
watch 28:07
Minecraft Interactive Experience
Do you like this video?
Play Sound
v1.4.1 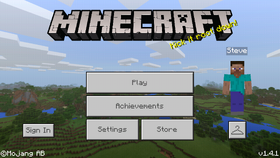 1.4.1 is a minor update to Bedrock Edition released only for Android and Fire OS on May 17, 2018, which fixes one bug.[1] It is still multiplayer compatible with other devices running version 1.4.0. The new incarnation of Bedrock Edition for the Nintendo Switch was released starting with this version on June 21, 2018.[2]