Edit
For a guide about all content currently released in this update, see Bedrock Edition guides/The Wild Update.
v1.19.0 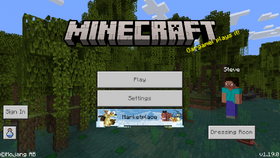 1.19.0 (Android, iOS, iPadOS, Fire, Windows, Xbox, PlayStation) or 1.19.1 (Nintendo Switch), the first release of The Wild Update, is a major update to Bedrock Edition released on June 7, 2022.[1] The update was first announced on October 16, 2021 during Minecraft Live 2021. It introduces the deep dark biome, the Mangrove swamp biome and mobs like the warden, the frog, the tadpole, the allay, and some new items included like sculk blocks and other items that are useful and for decorations.