Edit
watch 28:07
Minecraft Interactive Experience
Do you like this video?
Play Sound
For a guide about all content currently released in this update, see Bedrock Edition guides/Caves & Cliffs.
v1.18.0 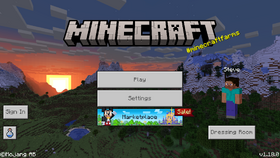 1.18.0, the first release of Caves & Cliffs: Part II, is a major update to Bedrock Edition released on November 30, 2021.[1] It was first announced alongside the release of the Java Edition 1.17 snapshot 21w15a when Mojang Studios stated the Caves & Cliffs update would be split in two.[2] Features from 1.18.0 were being developed alongside 1.17.0 through Experimental Gameplay. This is the third major update for Bedrock Edition that is split into several updates since Village & Pillage in 2019.

These additions and changes are accessible by enabling the "Vanilla Experiments" and "Enable GameTest Framework" experimental toggle.