Edit
watch 28:07
Minecraft Interactive Experience
Do you like this video?
Play Sound
For a guide about all content currently released in this update, see Bedrock Edition guides/Caves & Cliffs.
v1.17.0 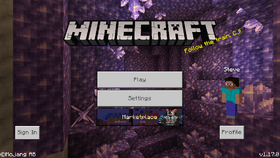 1.17.0, the first release of Caves & Cliffs: Part I, is a major update to Bedrock Edition released on June 8, 2021.[1][2][3] It was first announced during Minecraft Live 2020 on October 3, 2020.[4] This update added amethyst geodes along with amethyst blocks and items, copper ore and its derived forms, deepslate and its variants, and the goat, glow squid and axolotl mobs. The development versions of 1.16.200, 1.16.210, and 1.16.220 contain some of the Caves & Cliffs features through Experimental Gameplay; however, they are not included in the full release of those versions.[5][6]

Development phases contained some of the Caves & Cliffs: Part II features through experimental gameplay, which were not included in the full release but are part of 1.18.0.

These features are locked behind the experimental toggle, which can be accessed by enabling "Upcoming Creator Features" and "Enable GameTest Framework".