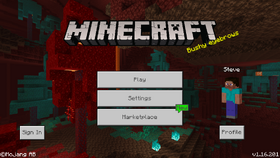 1.16.201 is a minor update to Bedrock Edition, released on December 15, 2020, which fixes bugs.[2] It was the last full version to be released in 2020 and the last version to support Android 4.x; further versions require Android 5.0 and above to play. This version also removes support for third party shader resource packs for Windows 10 or Console versions.

Third party shader resource packs are no longer supported on Windows 10 or Console versions, but still work on mobile devices that do not use the new RenderDragon engine.