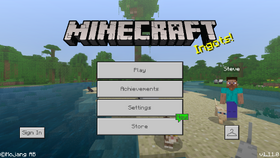 1.11.0, the first full[note 1] release of Village & Pillage, is a major update to Bedrock Edition that was released on April 23, 2019.[1] It adds many of the features of Village & Pillage that were not previously added in the past three versions.[2]

This section needs cleanup to comply with the style guide. [discuss]
Please help improve this page. The talk page may contain suggestions.
Reason: Grammar fixes and further explanations are needed.