From Minecraft Wiki
Revision as of 14:00, 8 April 2021 by JivanZa (talk | contribs)
(diff) ← Older revision | Latest revision (diff) | Newer revision → (diff)
Jump to: navigation, search
This article is about the Minecraft edition. For the indestructible block, see Bedrock. For the other version of Minecraft on consoles, see Legacy Console Edition.
Bedrock Edition

Bedrock Edition (also known as the Bedrock editions, Bedrock versions, or just Bedrock) refers to the multi-platform versions of Minecraft developed by Mojang Studios, Xbox Game Studios, and SkyBox Labs and based on the Bedrock codebase. The latest Bedrock Edition version is 1.16.220.

Although all Bedrock editions are nearly identical, the price[note 1] varies depending on the platform. The Android version costs US$7.49 (£5.41), while the iOS and Fire versions cost US$6.99 (£5.05). PlayStation 4, Xbox One, and Fire TV versions cost US$19.99 (£14.45). The Windows 10 version costs US$26.99 (£19.51), and the Nintendo Switch version is the most expensive, costing US$29.99 (£21.68). DLC purchased from the Marketplace on one platform is usable on all other platforms, but the game itself is sold separately on each platform. Xbox Live achievements are not shared between platforms and buying the game on one of these platforms does not get the game on the others. Despite all being UWP apps, Minecraft is sold as 3 separate apps at different prices on Windows 10, Windows 10 Mobile, and Xbox One. The Xbox One version is also playable to Xbox Game Pass subscribers. The Xbox One and PlayStation 4 versions are playable on Xbox Series X|S and PlayStation 5 respectively via backward compatibility.[33][34] As with all other versions of Minecraft, updates are free of charge.

The term "Bedrock Edition" comes from the Bedrock codebase, which was created by porting the Java code for Java Edition 1.9 to the C++ programming language for use in building a version to run on platforms that can't support Java. Code was then added to accommodate differences in the target platforms for such facilities as networking and storage access, but around 90% of the code is used on every platform. This common core of functionality is called the "Bedrock engine", but the engine itself has no independent physical existence.

Target platform builds are created individually, then transmitted to the platform's app store. Most stores have their own compliance requirements and will subject the incoming edition to a series of certification tests before making it available for download. Xbox Game Studios attempts to synchronize availability across stores, but the certification process is not under their control and can delay an edition's availability on a certain platform, especially if it fails certification and has to go back to the developers for a fix.

The name "Bedrock Edition" is not the official name of any edition of the game. Starting with the Better Together Update, all Bedrock editions of Minecraft have been named simply Minecraft. Before then, they each had a subtitle identifying the target platform, including Pocket Edition (for all mobile platforms), Windows 10 Edition, Gear VR Edition, and Fire TV Edition. The earliest of these was Pocket Edition, also known as "MCPE" or "PE", and these names were (and still are) sometimes used to refer to all the Bedrock editions, possibly even including those that were introduced after the renaming occurred.

Together, these complications made the official name Minecraft useless for referring to the Bedrock editions collectively. The editors of this wiki, however, needed such a term in order to describe the functioning of the Bedrock engine across all editions, so despite there not being a real Bedrock Edition, the wiki chose to use this as a term of art. Subsequently, the community adopted it as well and it is now the de facto standard term for referring to all the Bedrock editions collectively.

The objective of the game remains the same as its Java Edition and Legacy Console Edition counterparts, where players can build virtual realities in a sandbox-like environment. Like them, Bedrock Edition has survival elements such as hunger and brewing, and the Nether and the End dimensions. The multiplayer mode is cross-platform compatible between all supported devices.[38]

Bedrock Edition differs from Java Edition and Legacy Console Edition in a variety of ways, such as more saturated graphics, different terrain generation, some exclusive items, and an official add-on system.[39] The HUD and other elements vary for each relevant device. Players can interact with the game via keyboard and mouse, touchscreen or controller.

Some devices below these specifications have been known to work fine either with or without custom ROM images, kernels, and overclocking of the CPU. The MSM7227 CPU is not supported due to its lack of the floating-point unit.[42] The "Tegra 2" processor is also not supported because it lacks support for Neon.

A video of an early prototype was released on Twitter, showing the game on the Xperia PLAY. The Alpha version was later released, and was released for different platforms on October 7, 2011. The non-exclusive version was going to be released on September 29 for Android[43] but there were several severe bugs that needed to be fixed; the release was delayed until October 7.

A version for iOS devices was confirmed to be released before 2012 in an interview with Mojang Studios[44] and was subsequently released on November 17, 2011.

From version 1.2.0, the Better Together Update, the Bedrock editions no longer have the "Edition" subtitle and are renamed to simply Minecraft.[46] A port of Bedrock Edition for Xbox One was released along with the update, and one for the Nintendo Switch was released digitally and physically on June 21, 2018.[47] PlayStation 4 users received the Bedrock Edition with the 1.14.0 update on December 10, 2019.[48] Owners of the original Legacy Console Edition for these consoles are able to download the new version for free. In October 2020, the Gear VR and Windows 10 Mobile editions of the game were discontinued.[49]

Starting on November 22, 2013,[50] Mojang Studios began to publicly release testing versions of full updates to Android users who opt into the beta program, in order to get major feedback, especially for bug reporting. This enabled the official updates to be considerably more stable.

Versions from 0.8.0 to 0.12.1 required opting into a Google+ group to receive development builds. Players would then see development updates appear as normal updates in the Play Store. On July 17, 2015, the Google+ group was removed due to the amount of spam and advertisements that the group attracted.[51][52][53] On November 3, 2015, the PE Beta team published a dedicated blog[54] that was subsequently used for users to opt into the 0.13.0 beta program and to display changelogs for these development builds.

Players can also test certain features using Experimental Gameplay, a toggle that can be turned on through world settings, but once on it cannot be turned off again in that world. 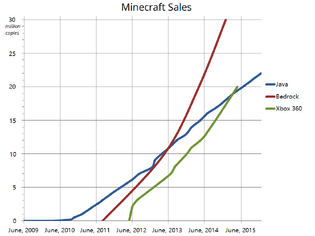 Minecraft sales data, up to December 2015.

As of December 2013, Pocket Edition (the only Bedrock Codebase edition at the time) had sold 16.5 million copies, while at the same time, the Java Edition had sold 13 million. These calculations came out after the 0.8.0 update.[55] This was considered a huge success, with Pocket Edition outselling both Java Edition and Legacy Console Edition, despite being considered to be the least-developed at the time.

Minecraft is also usually in the top 10 and regularly #1 in the App Store's and Google Play's Paid Apps Section in the Top Charts.[57][58]